To be honest, I don’t really have time to write this article. I’ve got loads of other things I should be doing. But it needs to be written. Now. So I’ve popped up my laptop on the bus and am angrily typing away.

Sounds so serious…what’s going on?

Here it is in action on an iPhone: 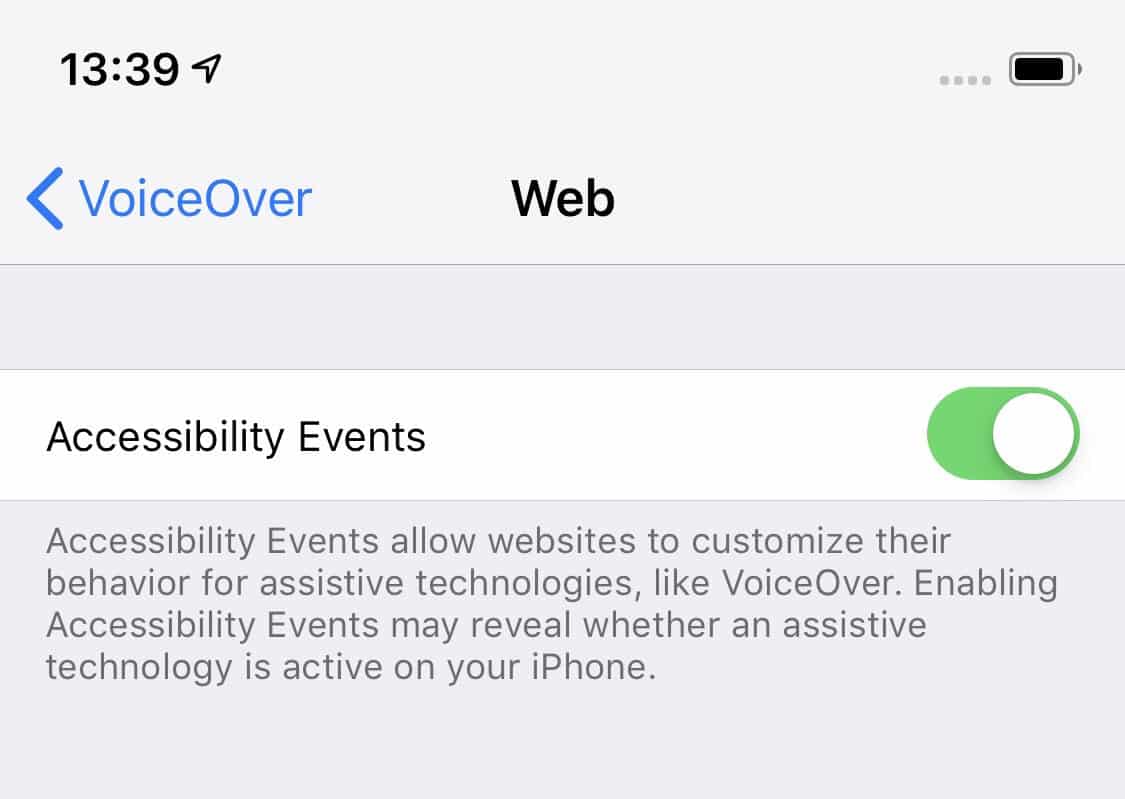 So this feature lets web developers recognise when an assistive technology is active on the user’s device. Sounds great, right? Gives developers a chance to improve the user experience for people with disabilities.

But think a step further and you’ll realise that it’s actually a terrible idea.

Well, accessibility guru and screen reader user Marco Zehe explains it well in his article Why screen reader detection on the web is a bad thing. Here is the most important part in my opinion:

Letting a website know you’re using a screen reader means running around the web waving a red flag that shouts “here, I’m visually impaired or blind!” at anyone who is willing to look. It would take away the one place where we as blind people can be relatively undetected without our white cane or guide dog screaming at everybody around us that we’re blind or visually impaired, and therefore giving others a chance to treat us like true equals.

I don’t want to be relegated to a ghetto. We’ve spent years encouraging people to move away from text-only websites, and with good reason. If there is one thing that history should have taught us by now, it’s that social segregation is a bad idea.

From my own experience, one of the most common questions I get as an accessibility consultant is “Can’t we just create a special site for people with screen readers?” I say that you can’t, and even if you could it would be a really bad idea. Inclusive design is about inclusion, not separation. The problem is that with this new tool from Apple, well-meaning people with this common, but terrible idea of separate “disability-sites” now can implement it, whereas in the past they couldn’t.

The accessibility community is not pleased

Other accessibility folks are not impressed either:

This new Accessibility Events feature for VoiceOver in iOS 12.2 might possibly be the worst idea ever (especially as it is enabled by default).

Sure, let’s give devs ways to identify blind users & serve alternate versions of content. That worked really well in the past. pic.twitter.com/gDTSvQqNKp

It's been possible in native apps for a while, but now @Apple has enabled disability fingerprinting in Safari on iOS. https://t.co/b7ahixqbke #privacy #fail

Yikes.. sounds like the perfect excuse to build "accessibility" in exactly the wrong way

I also discussed this accessibility events feature with my friend who is a screen reader user herself. She said it feels like it’s a first step towards a well-meant digital apartheid. To give you a magnitude of the impact this type of detection might have.

First I thought users needed to opt-in on the setting. It would still be bad but tolerable. But alas! It’s activated by default! So users who just turn the screen reader on have it enabled. Yes, they can turn it off:

How to disable "Accessibility Events" the VoiceOver and other AT tracking feature on iOS update 12.2 pic.twitter.com/RC5W8a0e1t

But everyone knows most users will be completely unaware of this feature.

This feature dropped like a bomb on the accessibility community and there’s basically no information out there on it. Nothing in the release notes, nothing on Apple’s site. It just appeared in the accessibility settings, and someone noticed and wrote a short article about it on Apple Vis.

My good friend Kolombiken (who writes the best accessibility newsletter out there, you should check it out) went searching for answers in a huge Slack group for accessibility nerds and found nothing:

I’m soo confused over this new “accessibility events”-thing in iOS. I came here to look for answers but seeing that people here are equally confused. But there must be some documentation somewhere? No?

Apple, you can’t just roll out a feature like this with no information! Come on, this is not like you!

Hopefully this is just a hiccup

I think it’s safe to say that Apple has some serious explanation to do here. Both around the feature and the non-existent documentation around it. Hopefully it’s just a mistake, wasn’t supposed to be rolled out or something similar.

Until that is confirmed though, I think it’s time for the accessibility community to protest rather loudly.

Yay! Apple has now removed the accessibility event feature, about a month after it was released. All is well and I’m not angry any more!