Accessibility according to actual people with disabilities

“If you have a disability, what’s the hardest thing about browsing the web?” The answers to Safia Abdalla’s tweet are truly eye-opening and shows us what web accessibility should really be about.

i'm curious to know: if you have a disability, what's the hardest thing about browsing the web?

rt for visibility, please and thanks!

In this article I’ll summarize and group the main topics that people bring up in the thread.

But do click on the tweet and read through all the answers. It’s an awesome read for anyone interested in making the web a better place for all. And, in my opinion, a far better place to learn about accessibility than reading any checklist or standard.

Videos without captions (subtitles) was by far the obstacle that most people commented on. Here is what a few had to say:

Being deaf, got to say captioning videos is number one issue for me

Video/audio with no captioning or transcript.

I’m hard of hearing so big pain for me is video with no captions. tweet or article just says “can u believe he said this?” & no summary

Also, my sister says that she hates it when she comes across videos that are not closed captioned. She’s Deaf.

Non-existing captions is something that can completely exclude users who are deaf or hard of hearing. But it affects many others as well. Anyone on the bus who forgot their headphones. Or some autistic users:

I’m Autistic and when I get overloaded, it’s harder to process auditory input. Especially if the person talking is offscreen or something

Many are hoping that automatic captioning solves this problem. But alas, not yet!

Not really YouTube’s auto subtitling is not accurate enough.

And the auto-captioning feature sadly isn’t available for most languages. So it’s still up to the video creators to caption.

Motion and animation can be annoying to anyone, but is extra frustrating to many users with cognitive impairments:

Assuming ADHD counts, it’s hard to locate content on overly busy pages and animations are a nightmare of distraction. #clickthemonkey

related, I’m also autistic and can get frustrated with, or repelled by, glitzy mouseover effects/animations, sudden autoplay, etc.

Do your users a favor by not distracting them with autoplaying videos, advertisements or image carousels.

Many replies, especially from people with dyslexia or cognitive impairments, were about large chunks of text.

Dyslexic – not really seen as a disability, but large walls of text is painful.
Also never ending sentences and over complicated language.

Huge paragraphs. A page on Wikipedia often consists of many long paragraphs with long sentences. I lose my place within seconds.

ADHD + large, uninterrupted blocks of text or small bits of animation not part of the main content of a page

Large paragraphs, too many moving images, too much content as videos (especially help files), no subtitles, pages with too much going on.

The solution is so simple. Just create more paragraphs and sub-headings! And throw in more bullet-lists. Voilà!

Amazingly there’s no minimum font size requirement in the Web Content Accessibility Guidelines. Even though it affects so many low-vision users.

Nearly blind in my left eye. Tiny, thin font with low contrast to the background

Fonts are often too small and sites break when I increase font sizes.

Some users with low vision point to layout and navigation problems when zooming or increasing font-size.

My daughter has low vision and has to use 300-500% magnification. Many web sites are hard to navigate at this level

Neurological vision problems due to CFS/ME. Small fonts, I browse everything with fonts enlarged, but sometimes it screws up the layout.

for visually challenged, it is understanding the layout

Low contrasts and image of text

One of the cornerstones of accessibility, color contrast, is still a major problem in a lot of interfaces.

Lack of contrast between font color and background color. Photo backgrounds that overpower the text on top of them.

Text rendered as graphics instead of text with no alt tags, no image description. From websites to memes.

So it is vital for web designers and art directors to understand how to measure and create accessible color schemes. Check out our list of seven great, free color contrasts tools.

Bright color schemes can be a big problem for users with low vision and is something that gets too little focus in accessibility discussions. It was interesting how many commented on it in the thread, and the different strategies they had to get around the problem:

(cont) so this is fairly simple but I really appreciate the “night” modes that some things have. Less eye strain that way.

re: frequent & debilitating migraines, so many sites are coded with light color scheme&I can’t use them even w/ sunglasses on & monitors dim

I need to be able to get the article onto my Kindle Oasis to avoid backlight. I’ve also found the reader feature to be hit-and-miss.

Relying only on color

This is also a cornerstone of accessibility that so many miss.

Colourblind. Text on background is usually fine, but things like colour-coded toggles, heatmaps, etc can be hard.

It’s really easy to test, just view your site in greyscale. Here’s an example of a toggle that’s really difficult to understand when you take colors away. Which one is on and which one is off?

And it’s not only people who are color-blind who need information to be conveyed in other ways than color:

Sleep disorder: I have to read after 5pm with f.lux cranked up all the way, so sites that assume hyperlinks can be blue w/no underline…

Even in this day of the touch-screen-revolution, too many sites still rely on mouse interaction. Especially for navigation on large screens. That needs to change.

The number of sites which insist on using mouse over as the only means of menu triggering.

For some users with motor impairments that navigate using only their keyboard, a clear focus outline is vital to being able to navigate the web.

Lack of focus outlines. Especially on links (they look ugly to most designers so they remove them) and custom components (eg dropdowns).

This topic is related to the mouse-focused heading above. Many people bring up the problem with too small touch targets.

My brother-in-law has cerebral palsy, buttons and links are too small for him to use. He can only use touch because he can’t hold a mouse.

Mobile twitter is also rly hard bc I have a tremor + visual-spatial processing issues. Often will click on the wrong thing by mistake.

A great new insight for me came from Dave Ross who brought up the problem of too large click targets:

Multi-touch gestures are also a deal-breaker for some users.

Yes! Kindle app has this “tap twice & hold” to get to the menu 4 display settings on books and it is super difficult. (Hand deformity)

These are actually some of the more common problems we find in our Accessibility Reviews ever since mobile browsing became the norm. Fingers are never as precise as a mouse pointer, even with perfect motor skills.

Finally, we end with a classic accessibility failure: the dreaded CAPTCHA. Annoying everyone who comes across it, but completely locking out many with visual impairments or learning disabilities. 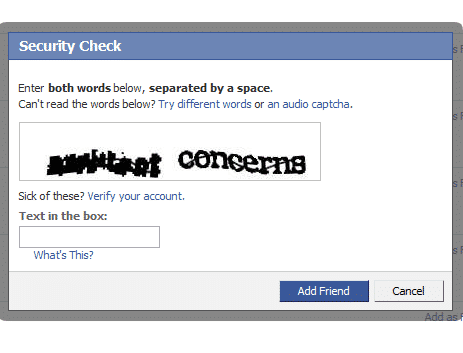 As to what drives her nuts, non-accessible captchas are the top. It can severely limit which services are available to her.

Reflecting on the answers to this thread, a few things become clear:

So thank you Safia Abdalla for tweeting your question. And thanks for everyone who responded and taught me (@hampelusken), and many others, a lot about accessibility.